Sometimes I feel like a mad scientist in the kitchen, mixing seemingly random ingredients, running the blender until it smokes, dropping things in the oven and then pondering where the burning smell is emanating from. You get the idea. While researching eggplants, the name “mad apple” really resonated.

The origins of eggplant are unclear and are often attributed to India, Africa, or South Asia. Eggplants first appear in Chinese manuscripts around 544 CE. From China, the eggplant slowly made its way to Persia. Writings from Al Raz (854-925 CE) a Persian scholar, describe the clinical symptoms of gum disease as the color of eggplant. This did not bode well for eggplant’s reputation. Other Persian documents attribute eggplant as a cause of a whole host of maladies including ulcers, intestinal blockage, leprosy, and many others. From Persia, eggplant made its way westward with the Arabs in the 7th and 8th centuries and spread throughout the Mediterranean. In Italian, the word for eggplant is melanzana. Over time, this word morphed into mela insana, which translates into the “mad apple” and the rumor that eggplants could cause insanity.

According to the Culture of Arab Food, in the Middle Eastern Arab countries, there are over 150 traditional recipes featuring eggplant. Although I have not had the pleasure of sampling most of these dishes, baba ganoush is one of my favorite ways to prepare eggplant. I love slowly grilling the eggplant to enhance its smoky flavor. When combined with tahini, lemon juice, garlic, olive oil, and za’tar it makes a wonderful spread for sandwiches or dipping pita and vegetables. The recipe below describes how we make this fabulous dish at my house using the beautiful eggplant varieties from our local farmers. 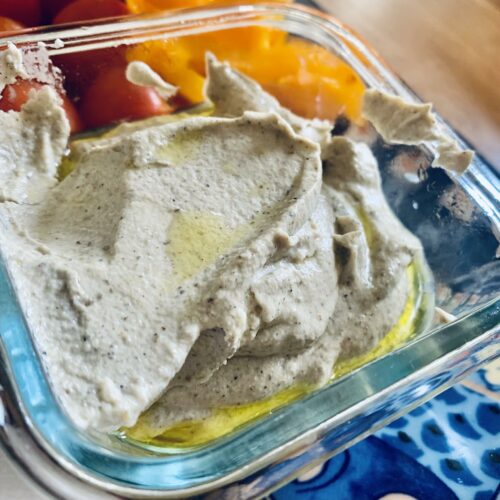